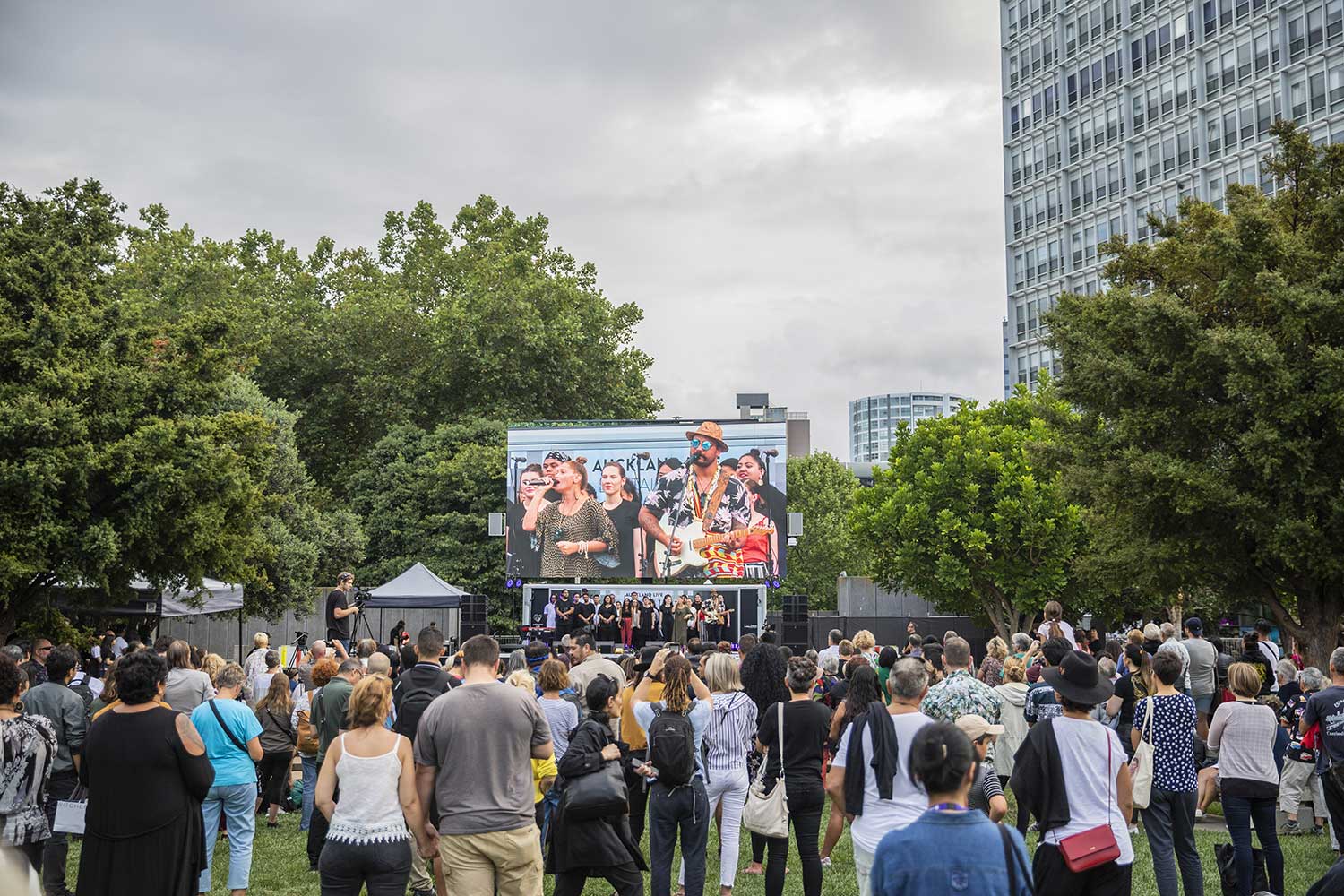 Article by Helaina Keeley and Aaron Cleland as featured in CX Magazine.

The establishment and direction of the Aotea Arts Quarter was something we had been developing since it was adopted as a strategy by the city in 2016.

Our existing digital offer included the Digital Arts Live programme which showcased interactive digital art works on a screen located inside the Aotea Centre. As an extension of this we identified that siting a large scale outdoor mobile screen in Aotea Square would increase the dwell time of people passing through and enable us to provide an increased level of programming, making the visitor experience richer and more interesting. Our intention was to programme mostly arts and cultural content, intensifying the offer of the arts venues. We also wanted to bring the experience of live performing arts to the public, to perhaps inspire the curious passer-by who may not have considered engaging with activity within our venues. In addition, the mobile screen offered an extension of our venue spaces to clients holding conferences, business events and the like. 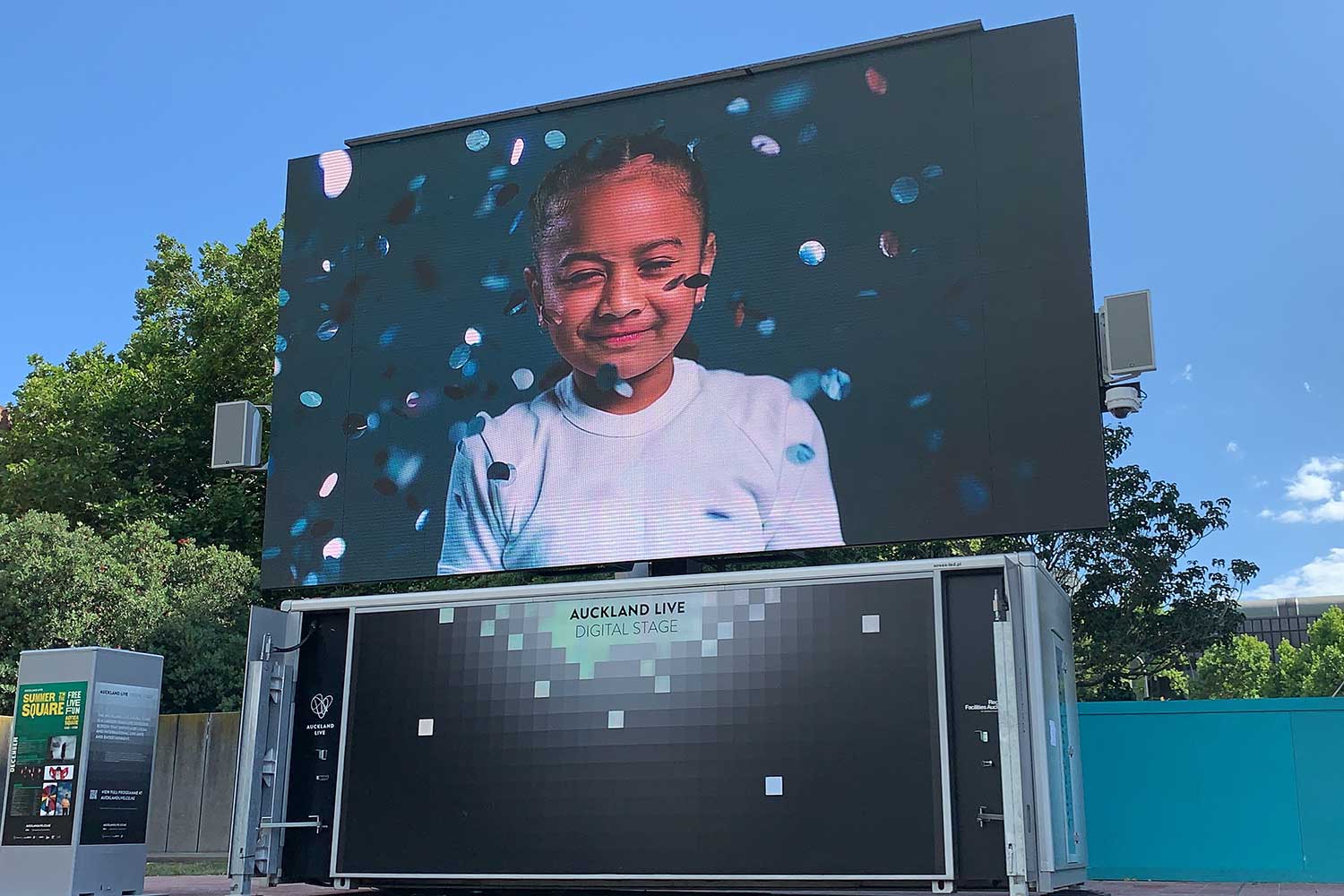 In addition, the mobile screen offered an extensionof our venue spaces to clients
holding conferences, business events and the like. – Helaina Keeley

Research told us that the city didn’t own anything that was comparable with what we were thinking, and we knew that our Digital Arts Live screen was reaching the end of its projected life span of approximately 10 years. There were however challenges to overcome with the proposed location for the Digital Stage as Aotea Square sits above a car park. These challenges included weight loading restrictions, the need for flexibility due to the regular use of the space for gatherings and events, and consenting obligations including consultation with mana whenua (the local Māori tribal owners of the land the square is located on), as well as noise implications. The portable solution solved these challenges for us and in addition provided the opportunity for relocation through the city centre when major events needed a digital platform.

When we went out to market, it was with these very specific requirements, as well as a focus on the brightness and quality of the picture we needed. Aotea Square is very large and of irregular dimensions and we ensured these parameters were clear in the tender document. What we found was that there wasn’t anything else in the market that was comparable to the solution proposed by ULA Group. The closest we could find were smaller LED screens mounted on the backs of bespoke trailers.

ULA Group partnered with ScreenLED in Poland to provide the complete solution including manufacture of the container, infrastructure, and hydraulics. When we initially looked at what they were proposing, we presumed it would be outside of our budget. Happily, when we started working through the proposal with ULA, it became apparent it was totally feasible, and it was an innovative solution to what we wanted to achieve.

Throughout the design and manufacturing process we worked closely with ULA and were in regular contact. ULA Group sent some of their senior staff to Poland and they were on site at ScreenLED as the Digital Stage was built – they even sent us pictures of the work-in-progress. When the Digital Stage was delivered, the lead of ScreenLED came out to New Zealand from Poland and was here for 10 days working with ULA as we commissioned it. All in all, both ULA Group and ScreenLED were excellent, and we have a great working relationship.

ULA Group partnered with ScreenLED in Poland to provide the complete solution including manufacture of the container, infrastructure, and hydraulics. – Helaina Keeley

The Digital Stage is currently deployed in Aotea Square for Auckland Live Summer in The Square.

It is a key component in this public square activation programme being used for live music events, live screening of the 36th America’s Cup, DJ sets, and Blob Collective’s interactive digital artwork Aotea Symphony, where the public can physically step on activation pads in front of the screen and trigger various animated graphics and sounds.
There are three locations we position the Digital Stage within Aotea Square depending on operational requirements. It is also relatively straightforward to relocate as it can be transported on the back of a truck.

Set-Up and Operation
One person can get the Digital Stage up and running in 45 minutes. There are two basic components to the process – the hydraulics, then the video and audio. Firstly, the container is levelled with its four hydraulic legs to ensure that the LED screen lifts out of the container properly without scraping the edges. Once that has been done, the top half of the screen comes out and rotates 180 degrees. That’s accomplished with a remote control that operates the hydraulics. The top half of the screen is then lowered onto the bottom half and connected hydraulicly. Both halves are then raised up on an hydraulic mast to their full heights, ending up about three metres off the ground. Then two sides fold out like wings, giving you the full 9m x 5m screen. 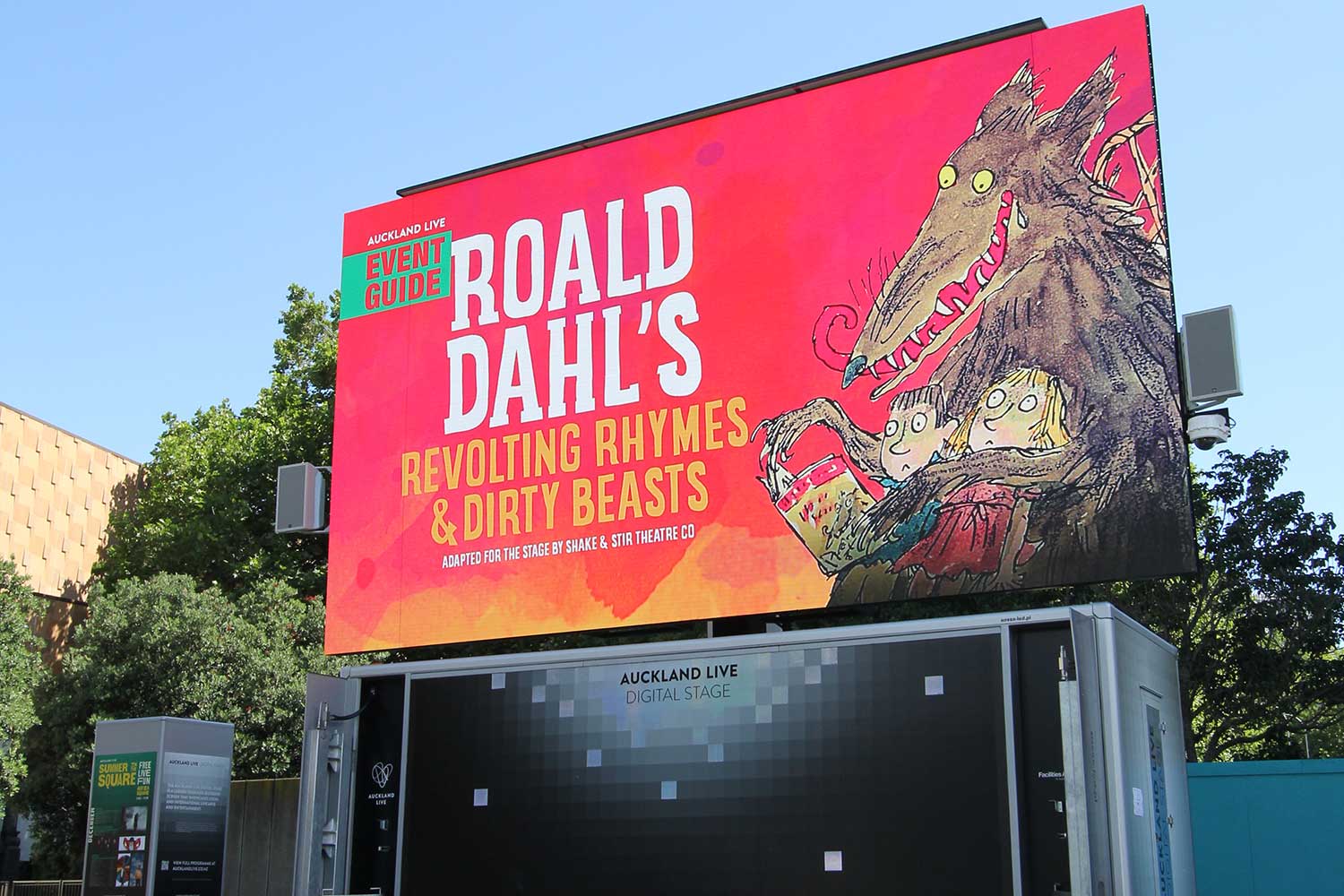 Inside the container, there is a small control room which houses the broadcast equipment. It can run locally off a laptop, and sometimes we drop in a computer to run interactive art pieces. Most of the time, the screen is running on a fibre connection to the Aotea Centre’s control room. This control room or broadcast suite was part of our investment in the asset, giving us broader digital capability across the different venues in the Aotea Arts Quarter, in addition to the Digital Stage. Our scheduling and playout software are all activated from this suite, pushing content to the screen.

When we are running live IMAG in Aotea Square, we run everything from the Aotea Centre’s control room. Cameras in the Square link back to the control room’s Ross Carbonite video switcher. If we are away from Aotea Centre, we drop in a vision switcher, and it’s easy to include live cameras. If it is just a one-shot we need, we have a PTZ camera attached to the side of the screen that can be manually patched straight out to screen via the Blackmagic router in the container’s control room. This gives us a shot of the crowd. People love seeing themselves, it’s the most popular thing to have on the screen.

Brightness and Quality
The brightness (over 5,000 nits) is exceptionally good. We often get comments about how clear the picture is even though the sun is hitting the screen directly on very bright days. Some people are in disbelief – we’re very happy in that respect!

Audio
We most often run audio with the two JBL speakers side-of-screen. When I saw the proposal, I was sceptical that only two passive 12s would provide enough coverage and SPL, but ULA chose well, and they do a great job.
We have a distributed speaker system in the Square on a delay matrix which we use for large events, but the screen runs most of the time with just its left-right pair.

Support
The on-going service and support from ULA Group has been exceptional. They are one of the best companies I have dealt with. When things inevitably go wrong with technology, ULA Group go out of their way to resolve things as quickly and efficiently as possible. That sort of support is hard to find these days

The VuePix Infiled Digital Stage (aka The Auckland Live Digital Stage) is a custom-designed mobile solution provided by ULA Group. The container and hydraulic mechanisms were built by Poland’s ScreenLED. It is essentially a transportable shipping container fitted with a 9m x 5m LED screen that opens out when needed and folds inwards for storage and transportation.

VuePix Screens for The Great Aussie Picnic in Canberra