One of the biggest moments on the annual dance music calendar finally ‘landed’ in October, with Parklife 09 officially signaling the start of the summer dance festival season.

Tens of thousands of people got into the party spirit around the nation, with a massive line up with more music to choose from than ever before. Main acts included Empire of the Sun, Tiga, MSTRKRAFT, La Roux and Autokratz, along with local supporting DJs such as Art vs. Science.

Clifton Productions under took site wide lighting in Melbourne with stage designs by Fuzzy Events with Parklife’s National Lighting Designer, Davyd Williams. This massive production was managed by local Production Manger, Adam Gibson in conjunction with National Producer, Josh Chapman. Parklife had its usual ‘nurtured’ stages of Fire, Air, Earth and Wind and definitely blew everyone away with sold out attendance at all concerts nation wide with over 20,000 + attendees. 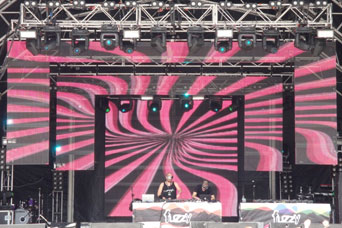 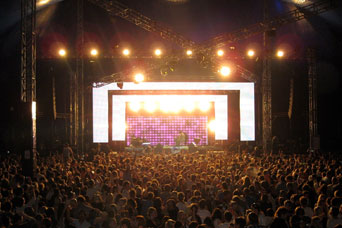 The Air Stage was housed with DJ’s to the likes of MSTRKRFT, Crystal Castles, Tiga and Autokratz. Lighting was operated by LD Justin Ogge (aka netball skirt) for the whole of the festival and LD Jack Davies for “Crystal Castles” designed the stage layout. 18 x VuePix P25’s were configured as a wall up the centre of the stage 3m wide by 6 meter high. All lights were controlled by a GrandMA.

System tech Matt Downs from Clifton Productions says “Parklife was a sold out crowd as we knew it would be as it is year after year.

Vuepix Centre Stage on the Rihanna and Chris Brown Tour