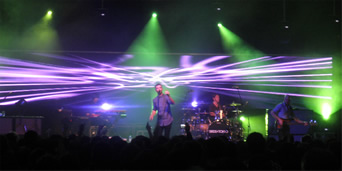 Birds of Tokyo are a 4 piece band from Perth who have had numerous hits on Australia’s Top 10 music countdown. After years of success, they have recently toured around Australia promoting their newly released album – Birds of Tokyo.

Owner, David Bell, from Alive says “Our client wanted a high impact rig on tour that would fill large venues to draw the crowds’ attention to the stage at all times, as well as having the ability to convey the songs visually via high definition video backgrounds”. David could meet his client’s criteria, supplying 30 VuePix P18 LED panels on the back of the stage, set up as one 10×3 super wide screen to fill the stage and impact on the larger venues.

The tour’s Lighting Designer Steve Granville says “We spent a long time picking vision for the show. We wanted to create not only an effect with the screen but build a setting for the performance.” He continues, “The VuePix panels I have used in the past have blown me away. We were running from flat single colour graphics through to full HD footage and it looked amazing across the board. Alive Technology Group were an absolute pleasure to work with, nothing is ever a problem with these guys”.

The rig also comprised of 16 Robe ColorSpot 700E’s and 12 Robe ColorWash 575EAT’s. Steve says “All the fixtures performed brilliantly on the tour, it was the first time for me using the Robe 700 fixtures in this environment and I would be hard pressed to go back to anything else now!”

David Bell stated that this was one of the best lighting shows he has ever seen. Management from Thebarton Theatre in Adelaide said ‘The LED display behind the band probably blew the budget out a little but with a sell out at Thebarton Theatre the move was more than justifiable, adding to the big gig ambience’.