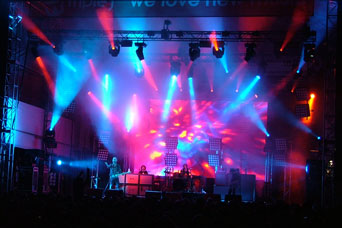 Groovin’ The Moo 2010 is a travelling music event that performs in regional cities including Bendigo, Townsville, Maitland, Canberra and Bunbury. Groovin’ The Moo presents a collection of music genres including rock, rap, dance, metal, hardcore and pop and has been growing steadily since its inception in 2005. Headliners include Silverchair, Empire of the Sun, Grinspoon, plus Tegan and Sara. Acts have a strong Australian focus, supplemented by artists from Europe, North and even South America.

There are three main stages used throughout the events consisting of the Moolin Rogue Stage, Myspace Stage and Triple J Stage. Clifton Productions supplied an impressive VuePix display comprised of VuePix P18 LED Mesh for the Triple J Stage – specifically for Empire of the Sun and Silverchair. The VuePix P18 has been a regular feature on gigs for Empire of the Sun. Configuration on stage of the VuePix P18’s was 6 panels wide x 7 panels deep at the back of the stage to show custom imagery.. Lighting designs for both these popular bands were by Hugh Taranto who also operated the lighting.

System Tech James Pavey says “ I like Vuepix as they are easy to set up, easy and simple cabling and there are endless configuration possibilities. 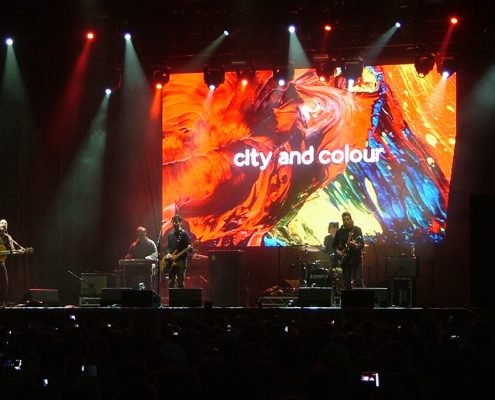