Channel Seven’s broadcast has been viewed by over 17 million Australians, outpacing all other Olympic Games and other major events over the past five decades.

Beijing 2008 was the first time the event has been broadcast in HD, with Channel Seven broadcasting over 17 hours a day of 1080i coverage.

Mal Nichols states that the goal of the lighting in the television production was to “create atmosphere, and increase options and flexibility” in a very small environment. This was the key motivation behind incorporating the VuePix screen, as the versatility of the screen allowed various content to be relayed to the audience – including live to air feeds and computer generated graphics. It was also imperative that the screen had brilliant resolution, so as to ensure that the quality was maintained for 7’s HD broadcast. Mal states “the resolution was of surprisingly quality for a 6mm, and there was no strobing through the screen”, which was essential for a flicker free broadcast. 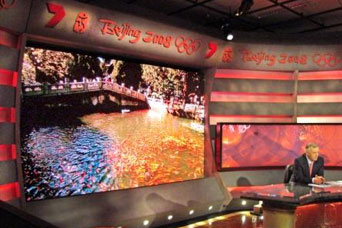 This impressive screen was VuePix’s P6 RGB SMD 3in1indoor model. The P6 is a high resolution (6 mm) display with a calibrated brightness of 1000cd/m2 and a pixel density of 10, 000 pixels/ m2 to deliver unrivaled light output, and incomparable color depth and uniformity, best suited for broadcast conditions. The content was powered by a multi-format image processor that accepted Channel 7’s HD SDI signal and digitally scaled it to 1024 x 768 (to fit the format of the screen) with ease. This signal was then sent through the VuePix’s video processor, which can accept a wide range of incoming signals: S-Video, composite, DVI and VGA. The screen was configured via the VuePix LED Studio software.

James Pavey of Clifton Productions supports the screen by stating “it looked good and went together easily”. He goes further to say “there were many positive comments from crew and guests on the set”. The VuePix range of leading LED video screens for indoor and outdoor use is distributed exclusively in Australia by the ULA Group.