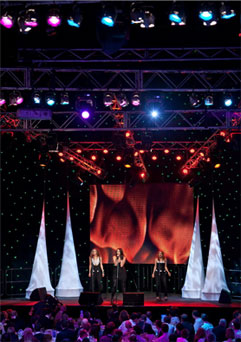 The breakfast marks the traditional beginning to Grand Final day and is one of the big social highlights on the Australian sporting calendar. Watching the event is a ritual for many footy fans and the function plays a huge role in the pre match build up for the AFL Grand Final. The breakfast includes a Grand Auction, with all proceeds being donated to the Starlight Children’s Foundation.

Clifton Productions were employed to provide lighting and visuals for 1500 guests that attracts the who’s who of Australian sport, politics and culture and includes performances from some of the biggest acts in town.

28 x Robe ColorSpot 1200AT and 24 x Robe ColorWash 1200AT’s were used for room washing and rigged above the triangular stage. Also rigged, hanging from the fingers above the stage were 6 x Robe ColorSpot 700EAT along with 31 x iLED LEDSource 36’s for multi colour stage washing. 8 x iLED ColorBank 54’s were placed inside cones to illuminate up these set pieces.

On the back of the stage 10 x iLED Star Drapes were installed with a VuePix P10 display of 12 panels behind the band stage. This was driven by Catalyst media server and switched from the generic holding slide to funky graphics for each of the performances on stage.

Behind the main table on stage, a banner of VuePix P6 LED panels were configured 10 panels wide by 2 panels deep. This screen was primarily used for sponsor’s logos in the background of this table. With a resolution of 1280 pixels, this screens images were processed by a Folsom ImagePro. All room visual media was operated by James Pavey from Clifton Productions. Lighting Tech’s were Aaron Humber and Justin Ogge, with Lighting Designs by Alex Saad and Don Collins.

Production Manager Brad King from Cliftons Productions says “Everyone was extremely happy with the room visuals and overall effect of the AFL Breakfast. This event was a great success and we are happy to be apart of this yearly event again”.