It was double pleasure for music fans with two of the hottest young international RnB singers wowing sold out crowds with their acrobatic and visual extravaganza.

Clifton Productions recently supplied 220 Vuepix P25 screens to Big Picture Australia for the Rihanna and Chris Brown Tour. With a touring crew of 120 people, including lighting, video, audio, laser & pyro team this show was set for a visual feast.

System Tech Matt Downs from Clifton Productions says “We didn’t take any spares on the tour, but we recommended reducing the main screen size to allow for spares but the client wanted a ‘wow’ visual impact.” “It was a risk, however we are very confident with this product.” This clever design of the Vuepix screens nicely framed the stage and drew the audience in, making this smart visual presentation with rich graphics and imagery ignite the stage. Mainlight SoftLED was also included on stage for the beginning of Chris Browns set. 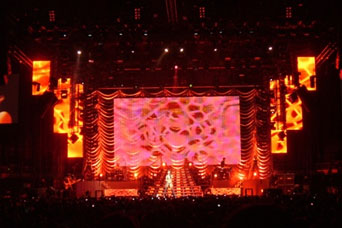 Matt says “The Vuepix screens worked without fault at every show once it was up and running. It took 1 hour 20 minutes to set up and test all 128 screens which is great.” ” I like Vuepix as they are easy to set up, easy and simple cabling and there are endless configuration possibilities.

As you can see Vuepix held its own amongst all the other technology used on the tour”.

Continuing on to say “The video operator said that the Vuepix screens were one of the easiest screens he used to set up and operate anywhere”. Matt says “Following on from this production, Vuepix continues to generate extensive interest and is featuring on more and more tours and festivals”.

Vuepix redefines the imaging landscape and customise LED video screens and curtains to any specifications. Already installed in many stadiums and sporting arenas, and adopted by small to large rental houses for production and touring, the Vuepix range is affordable, versatile and simply put – an impressive addition to any production house inventory. 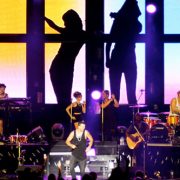 VuePix at Parklife
Scroll to top