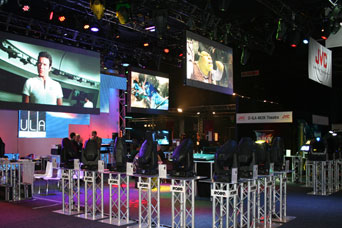 With its debut release into the Australian market at Integrate 2010, it created incredible interest across a wide range of markets and industries.

Integrate 2010 was held at Sydney’s Hordern Pavilion complex from 24th to 26th August 2010. The exhibition was well attended, attracting over 90 exhibitors. ULA Group’s stand introduced the “VuePix® latest technology experience” attracting great numbers. This experience made ULA Group a key exhibitor and certainly the largest lighting and visual exhibitor at the show.

The VuePix® P-10′ panels from the L Series feature an innovative light weight design, with each module weighing a low 18.5kgs which are around 30% lighter than other competitive products. This fully modular system enables the L Series to be serviced by hand and with no tools required to interchange modules and power supplies.

VuePix® was certainly the talk of the show, also displaying the P6 VirtualPix Outdoor screen, P5 SMD Indoor Screen and P18 SMD LED Screen’s on the stand. The enthusiasm of LED technology has truly taken hold, with huge interest in all the VuePix® range. VuePix® screens cater for all industry needs offering LED displays from 5mm to 31mm pixel pitch in a variety of formats.