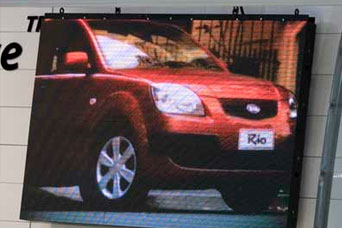 The latest in High Resolution video screens is the Vuepix range of LED video solutions, distributed exclusively by the ULA Group. Making its official launch at Entech 2008, the Vuepix screens have quickly made their way into the production world with a debut at the Melbourne International Motorshow this March.

Purchased by Clifton Productions, the Vuepix P10 LED Video Screen was featured on the Kia stand at the Motor Show. With a very successful start to the year, and the launch of two new models, the Kia Display at the show needed to have significant impact. The Vuepix screen certainly helped with this, and was used to display full color moving images of the Kia, as well as text and static images.

The VuePix P10 LED screen delivers superior high resolution. The screen has a pixel pitch of 10mm and is completely modular for ease of rigging and setup in touring and production applications. The VuePix P10 LED screen is equipped with SMD RGB 3 in 1 LEDs and has a pixel density of this screen is 10 000 dots/m2. The P10 screen is ideal for synchronous display of all kinds of text, graphics, pictures, signs, and any signal from DVI, VGA, Composite, Component and S-Video.