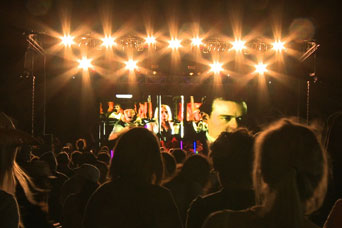 Over 90 VuePix P18 Outdoor panels took a centre stage at MSFEST 2010, one of the Tasmania’s biggest music festivals. More than 13,000 festival lovers were treated with some of Australia’s best music, including Eskimo Joe, Karnivool, Evermore, Kisschasy, The Potbelleez, Goodwill, Jessica Mauboy and many others.

Being an all ages festival, MS Fest is primarily aimed at the youth market, however the line up and the general festival vibe is conducive to anyone wanting to have a great day.

The 2010 event was an outstanding success, the organizers were able to raise over $150,000 to aid people living with Multiple Sclerosis and The MS Society of Tasmania.

The energy of the crowd was split between the Main Stage and Clubbers Stage. On the Main Stage VuePix panels were linked as a massive 8.4m wide and 5.4m high screen at the back of the stage and used to show live camera feeds mixed with VJ vision
and imagery.

The 30 VuePix P18 panels were supplied by local Alive Technologies with additional screens supplied by Cliftons.

The production organiser’s and LD Steve Granville were very happy with the VuePix screens performance. David Bell from Alive Technologies Group comments: “In past years the only screens in the state were too heavy and bulky to even think of flying them in the back of the stages. But now with the introduction VuePix P18 panels it was possible to maintain the same quality and resolution while flying the screen from the stage roof“. The screen was also an integral part of the visual effect of the show as it could be seen during the daylight, as where majority of the lighting did not come into play until dark. During the evening the main stage screen had to be even turned down to 45% intensity so that it did not overpower the artists on stage, such was the visual performance of VuePix P18.

Bell adds: “We have found that more and more clients are asking for the VuePix P18 screen by name, we could not be happier with our decision to purchase this extremely flexible product. There is also no other product of this nature in Tasmania at the moment which is giving us an edge when putting together shows.”

VuePix® on the George Michael Concert