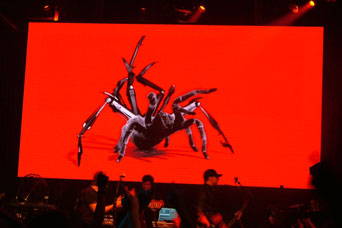 Fresh from sell-out shows and festival appearances worldwide, Pendulum, with their high-energy came to Home Nightclub for one exclusive gig for the Debit MasterCard Priceless Music series, where they performed tracks off their new album, Immersion.

Clifton Productions System Tech James Pavey says “Everyone commented on the resolution of the VuePix P6, commenting the picture was so clear it looked like a Plasma screen, which in fact the resolution of the screen was at 896 x 460. We received a lot of positive feedback on the screen!” The images were driven from a proprietary media server by the bands lighting operator.

James said that the VuePix displays are so easy to configure, and assembling is a snap – quick and easy which is great for live work.